In this area, too, the quantitative results are remarkable. Previous surveys had identified 19 contexts (17 on-site and 2 off-site). Magnetic and electrical resistance prospection and aerial survey have now revealed a dense pattern of 883 features ranging chronologically from the Etruscan to the Middle Ages and varying from settlements to field systems, enclosures, graves, road systems, geomorphology and so forth. In this block a particularly important complex near Aiali was identified in 2001. Oblique aerial photography on that occasion revealed a large building complex that was subsequently investigated through intensive artefact collection and various forms of geophysical survey, to shed light on a massive rural settlement about 4 ha in extent, with some open areas, covering a time range from the late Republic to the Middle Age.

The Roman complex, lies either side of an apparent major road linking this area to Rusellae about 4 km away to the north-east. This is clearly an advantageous position within the landscape, alongside the Prile Lake, close to Rusellae and with the mansio at Hasta a further 18 km away to the south as the crow flies.

Further significant features in this area include a clearly-organised and roughly grid-like field system oriented north-west to south-east. Artefact collection across the area has provided provisional dating for buildings and other features within the complex. The southern (and later) buildings in the complex are clearly parts of a villa complex, oriented in keeping with the field system while the northern (and earlier) building (1) is not. There is also an early medieval building in much the same area (4) as well as an early medieval ditched enclosure, rectangular in this case, a few hundred meteres to the south-east (5). The ditched settlement is oriented in broad alignment with the field system, suggesting the possibility of some form of continuity in the organisation of the landscape from the Imperial Roman age to the early medieval period. 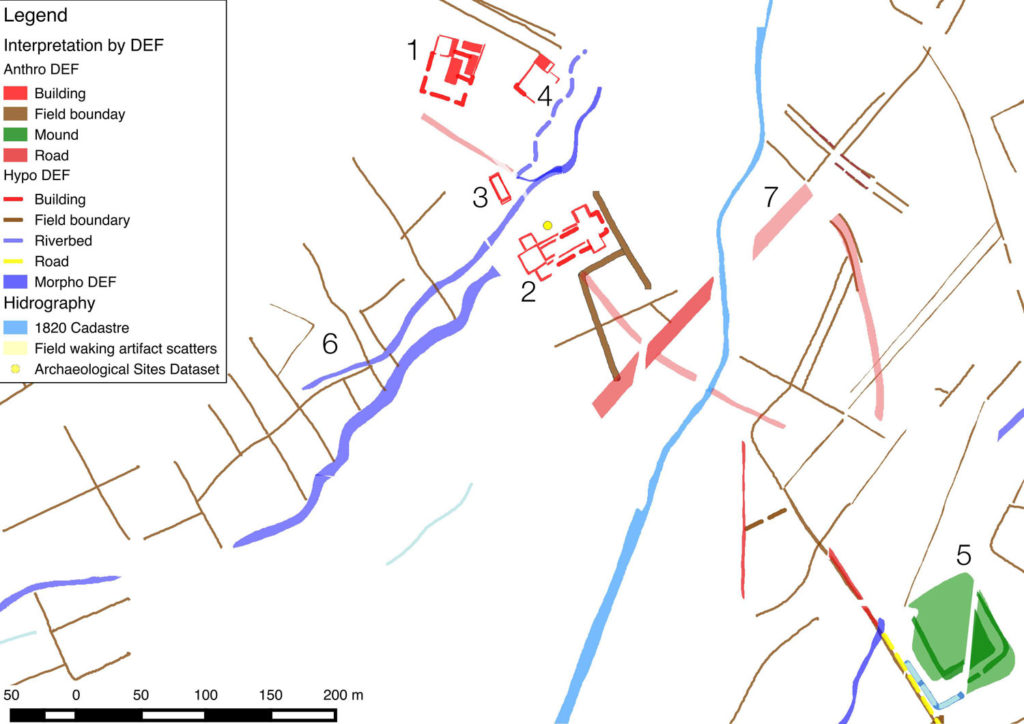 Within the field system the average size of the parcels is very close to the Roman iugerum or its multiples, but the pattern is fairly uneven, as might perhaps have become the case if the system remained in use for many centuries after an original creation during the Roman period. Local historians have attempted in the past to identify a pattern of centuriation in this area but their hypothesis still awaits confirmation; at all events their supposed pattern does not match either the field system or other features described here. It is perhaps premature to claim, on the basis of orientation and parcel size, that the recently revealed fields represent a centuriation system set out in the mid Imperial age and remaining in use until early medieval times. For the moment the question of dating and derivation must remain unresolved, at least until test excavation or further remote geophysical prospection can provide a secure guide to the chronological range and possible extent of the field system so recently revealed.